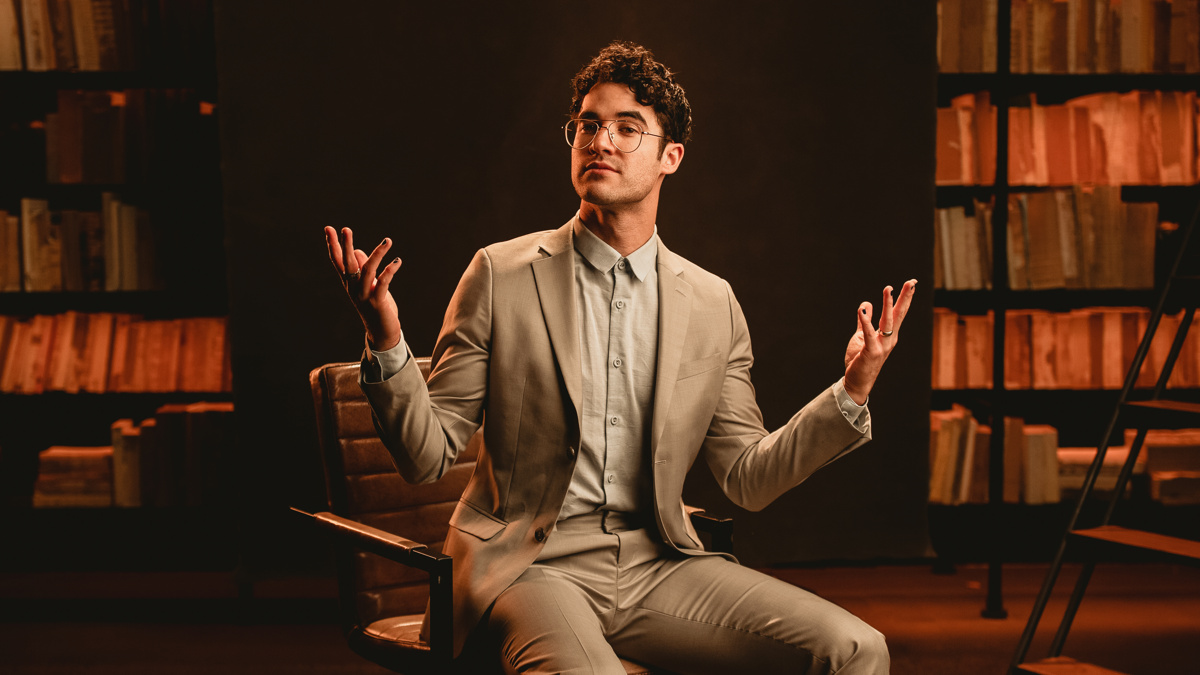 Darren Criss Gets Spooky with Muppets
Broadway alum Darren Criss shared on Twitter that he will appear in the upcoming Muppets Haunted Mansion when it arrives on Disney+ later this year. The movie takes place on Halloween night when Gonzo is challenged to spend one very daring night in the Haunted Mansion. An Emmy winner for American Crime Story: The Assassination of Gianni Versace, Criss has been seen on Broadway in Hedwig and the Angry Inch and How to Succeed in Business Without Really Trying. A release date for Muppets Haunted Mansion will be announced later.

Watch Camila Cabello & More in New Cinderella Music Video
We knew Cinderella star Camila Cabello was contributing original songs to Amazon Prime Video’s forthcoming movie musical, which arrivess on September 3. A new music video is out now for the new song “Million To One,” and it has shots of Tony winners Idina Menzel and Billy Porter in the movie. Check it out below!

Arnie Burton Joins Douglas Carter Beane’s Fairycakes
Drama Desk winner Arnie Burton has boarded the cast of Douglas Carter Beane’s comedy Fairycakes, replacing the originally announced Brooks Ashmanskas, who exited the show due to a television opportunity. The world premiere is set for October 14 at the Greenwich House Theater. Fairycakes, which will open on October 24, and is set to play a limited engagement through January 2, 2022. Beane will direct the cast, which features Mo Rocca as Gepetto, Alfie Fuller as Peaseblossom, Sabatino Cruz as Pinocchio, Jackie Hoffman as Moth, Kuhoo Verma as Cinderella, Z Infante as Cobweb, Ann Harada as Musterseed, Jamen Nanthakumar as Changeling, Julie Halston as Titania/Elizabeth, Chris Myers as Puck and Jason Tam as Prince/Cupid.

Cast Announced for Suzan-Lori Parks’ White Noise at the Bridge
As previously announced, Pulitzer Prize winner Suzan-Lori Parks’ White Noise will receive its European premiere at the Bridge Theatre in London from October 5 through November 13. Opening night will take place on October 12. Directed by Polly Findlay, the cast includes James Corrigan, Ken Nwosu, Faith Omole and Helena Wilson. The show played a twice-extended run at the Public Theater in 2019. White Noise follows longtime friends and lovers Leo, Misha, Ralph and Dawn, who are educated, progressive, cosmopolitan and woke. When a racially motivated incident with the cops leaves Leo shaken, he decides extreme measures must be taken for self-preservation.

Full Cast Set for London’s The Woman in Black
Stephen Mallatratt’s adaptation of Susan Hill’s The Woman in Black has found its cast. Terence Wilton and Max Hutchinson will both return to the production as Arthur Kipps and The Actor, respectively. Known as the West End’s second longest-running production, The Woman in Black is directed by Robin Herford and celebrated its 30th anniversary in June 2019. As previously announced, the play will welcome audiences once again at the Fortune Theatre beginning on September 7.

Tony Winner Joanna Gleason to Write and Direct The Grotto Film
Tony winner Joanna Gleason is set to make her feature film writing and directing debut with The Grotto, according to Deadline. The film follows Alice, a 40-something woman, who uncovers her recently deceased fiancé’s secret past when she inherits part ownership of a forgotten nightclub in the Mojave Desert. Gleason’s 18 High Street Films, Ouroboros Entertainment and T42 Entertainment are partnering on the film, which is set to begin production later this month. A Tony winner for 1998’s Into The Woods, Gleason has two other nominations for A Day in the Death of Joe Egg in 1985 and 2005’s Dirty Rotten Scoundrels. Her screen credits include The West Wing, The Affair, Unbreakable Kimmy Schmidt, Crimes & Misdemeanors, Boogie Nights and more. Casting and a release date is to come.